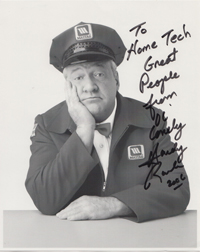 Most of us grew up watching the popular Maytag commercials featuring “the loneliest guy in town”, the sad-faced, but always friendly, Maytag Appliance Repairman. Maytag’s appliances were so well put together, that he didn’t have a thing to do (except complain about being bored). Jesse White originated the good-natured sad sack and starred in the television commercials from 1967-1988.

This year, Maytag introduces us to a new Maytag Man for the millennium (gone is the word “repair”) — and he’s NOT your mother’s Maytag Man — this one is buff, chiseled, and comes with a dry wit. Played by actor Colin Ferguson, the new Maytag Man not only tells us about the excellence of the appliance — at the end of each ad, he actually becomes the appliance. This is a hip, new Maytag Man who’s so busy inhabiting various machines, that he never gets lonely or bored. Look for him in different commercials to become a refrigerator, an oven, and a washer and dryer – all while wearing the familiar blue uniform. As the tagline suggests, “It’s what’s inside that matters.” And what’s inside is a hot new Maytag Man. To see one of the fun new ads, just visit our Facebook page. 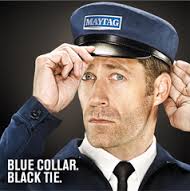 Here at Home-Tech, we’ve got 50 shades of guys to take care of your every need and you never know which hottie will be ringing your doorbell. With our Service Agreement membership, you never have to worry about appliance repair, because our expert technicians — who aren’t just a bunch of pretty faces and rolling biceps — know what they’re doing. Plus, they’re available and at your beck and call 7 days a week for your air conditioning and appliance service, saving you thousands of dollars versus hiring outside repairmen. So, enjoy the busy, young, new Maytag Man on TV, but know that your “Home-Tech Man” is busy too (we are in over 300 SW Florida homes a day) but always just a phone call away, live and in person.

I’ve had Home-Tech several years and I appreciate the tips, answering my questions and all the help.

We have home warranty with Home-Tech. A/C was out when we got home yesterday. Called, within the hour they were out here. They ordered the part, was out today and had us up and running and no charge. We’ve always been so pleased with Home-Tech!

Today I met Matt, who was very efficient, fast, courteous and neat. I have always been more than pleased with whomever comes. I have been a customer since day 1 (35 years ago) and will never change companies.

Alfy came early and completed the service in a speedy manner. He was very courteous and did a great job. I am so happy to have Home-Tech and whenever I have needed service they are always prompt and do a wonderful job. Thanks so much!

I’ve been your customer for some time. Your man did a good job on my AC system.

I always feel good about having a Home-Tech employee come to service my home appliances. I appreciate your employees and how they are treated as employees of a great company in SW Florida. Keep up the good work!

We are very happy to have signed on with Home Tech. Every technician is friendly and knowledgeable and the response time is quick.

It is sooooo comforting to know that Home-Tech’s awesome service people spring into action – competently, politely, and quickly – whenever I need them. Get yourself a contract and put your mind at ease!